The first time I tried taking the train in China (along with my bike) was a stressful and complicated affair. I was taking a high speed train from Beijing to Xi’an and nobody at the Beijing West station seemed to know what to do with me (especially since I didn’t speak any Chinese and could only communicate with Google Translate). I eventually figured it out, though, and have since traveled with my bike pretty extensively throughout China. 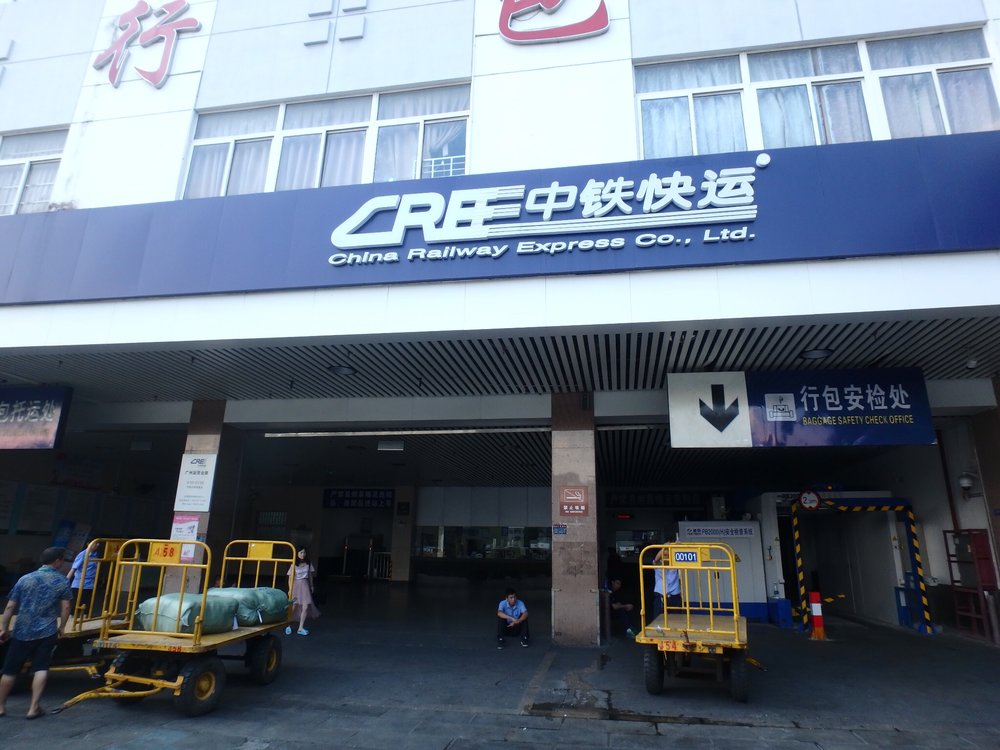 Roughly what the CRE office will look like, just look for the CRE logo and an influx of packages being delivered and taken away. Credit to Novice Cyclist for the photo.

If you have a full-size, assembled bicycle (i.e. a normal bicycle that isn’t packed up in a box) then you’re going to have to consign your bike with CRE (this website claims you can also leave your bike at the luggage office, although I’ve never done this). CRE (China Railway Express) is some kind of railway shipping company which usually has an office somewhere around the train station. It’s outside the station, usually in a normal looking storefront or office. Sometimes it’s directly next to the station (at smaller stations) and sometimes it’ll be a block away (at bigger stations), so you might have to do some looking around.

Most of the time, if you’re traveling by normal train (and not a high speed train), CRE will put your bicycle on your train, so you’ll be able to pick it up as soon as you arrive at your destination. Just be there a couple hours early and show one of the employees at CRE your train ticket. Sometimes there won’t be room, or the train won’t have a luggage car (I don’t think any high speed trains have luggage cars), so your bike will have to be put on a different train.

You might have to fill out a form with your name, phone number, passport number, and signature. I’ve highlighted what goes where.

You’ll be given a slip (keep it safe, you’ll need it to pick up your bike later!) and will have to pay for the consignment. The price is usually negotiable and I managed to never pay more than 100 yuan (around $15), even on a 27 hour train from Kunming (in Yunnan) to Zhangye (in Gansu). 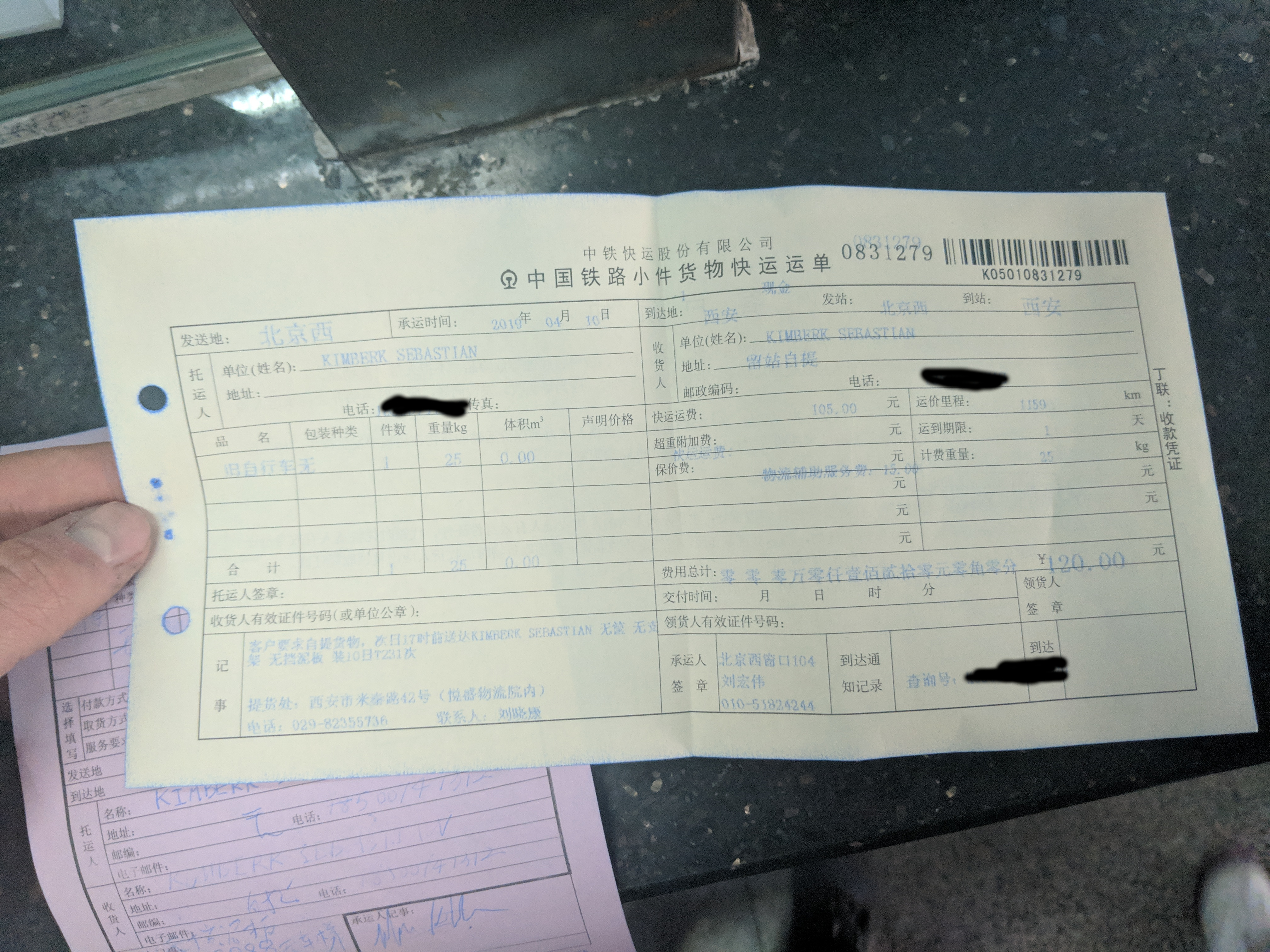 This is the slip you’ll be given, make sure you hold onto it as you’ll need it to pick up your bike at the destination station.

Once you arrive at your destination, find the CRE office (sometimes, especially at bigger stations, there are slightly different locations for leaving and picking up packages) and give your slip to one of the workers. Usually there will be a woman behind a glass pane who will take the slip and get you your bike. Hopefully the office will be open when you arrive, although if your train is arriving in the middle of the night you might have to wait until morning for it to open. 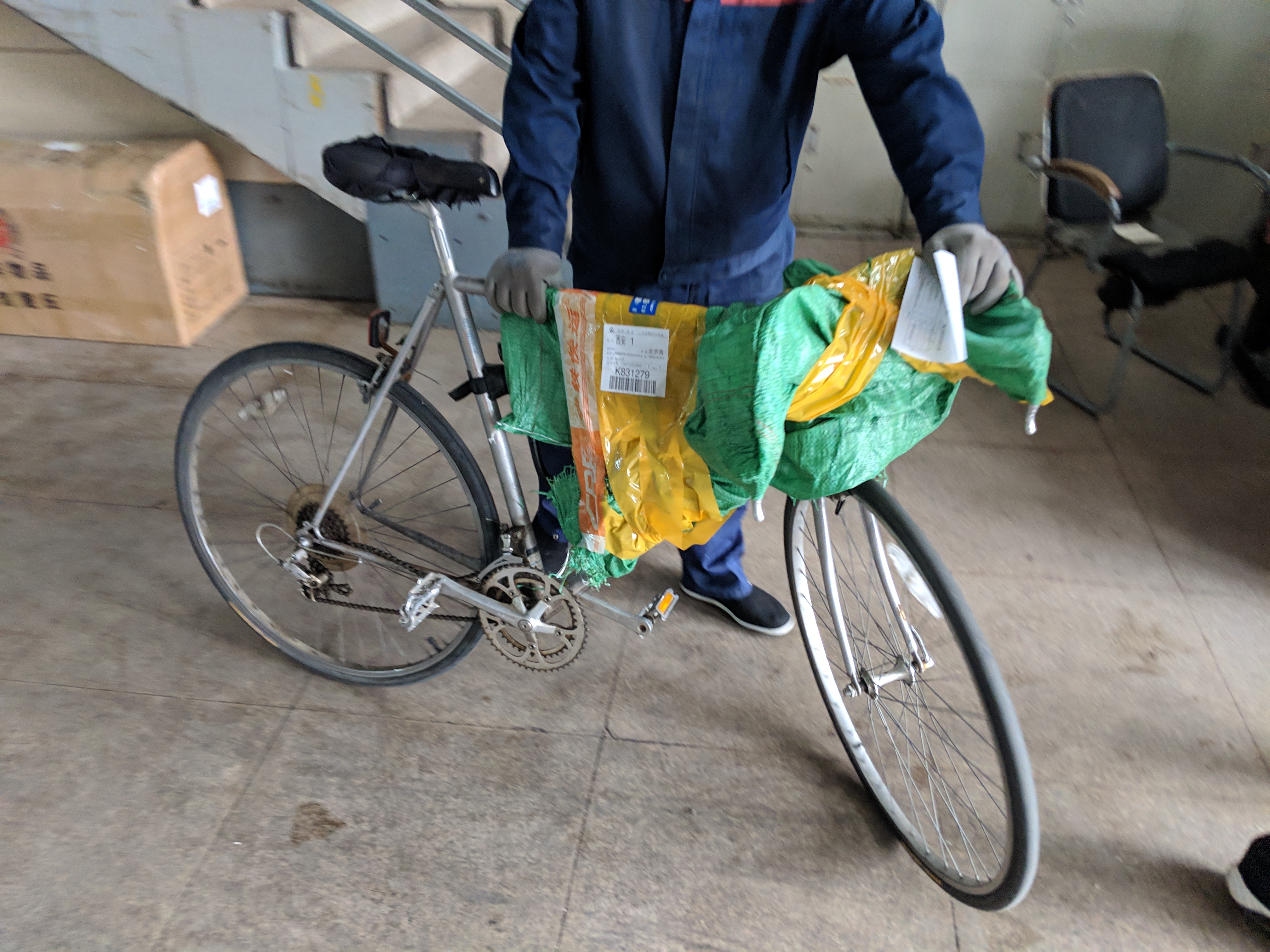 My bicycle all packaged up at my destination station! Usually they just tossed it in the luggage compartment without any packaging though, so make sure to take off anything that might fall off or get broken.

As I mentioned above, I managed to do all this without speaking any Chinese or knowing anything about Chinese train stations. Usually with enough Google Translate (or Baidu Translate, which I’ve found gives better translations) and pointing you’ll be able to figure things out.