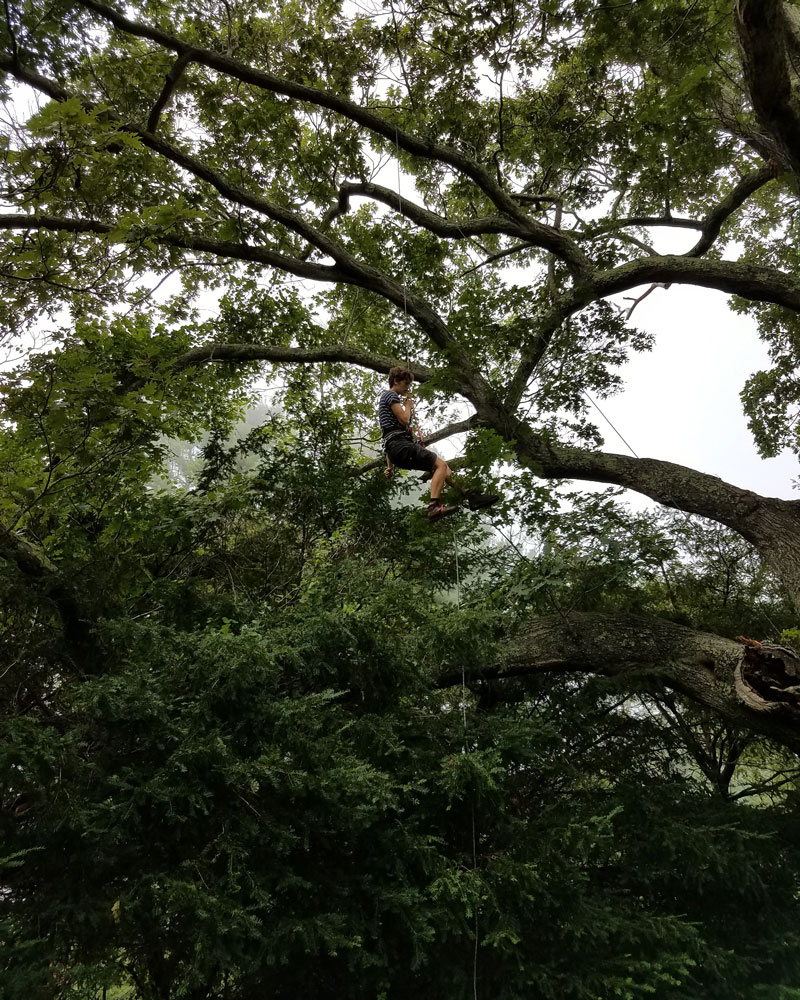 In the northeast corner of my father’s yard resides an oak tree. It’s a massive, ancient thing, my outreached arms barely able to make it half-way around its gnarled trunk. Its canopy is crisscrossed with steel cables, bolted deep into the thickest branches, helping the tree maintain its composure as it ages. For one branch, however, its cable wasn’t enough. Jutting from the left of the tree, spanning the length of a telephone-pole laid on its side, the branch was a miracle of natural engineering. At its midpoint was attached a single glistening steel cable, disappearing high into the tree, and at its base was an ever-growing crack.

While the branch was not yet dead–its subbranches still decorated with hundreds of vibrant green leaves–my dad doubted it would survive the next big storm. Instead of waiting, he thought it would make for a good project to disassemble it by hand.

I eagerly volunteered and we soon got to work preparing the tree for her upcoming surgery. We launched three ropes high into her canopy–one rope thick and aquamarine, the other two slender and grey–and I suited up with thick boots, a climbing harness, and a chainsaw.

It didn’t take me long until I felt I had gotten the hang of things, walking along the branches, taking in slack from one rope as I let out another. I would start up my chainsaw with a yank on its starter cord, trim a few chunks off the outermost subbranches, and await further instruction from my dad.

We formed an efficient assembly line, my dad inspecting the branches from below, me cutting branches from above, and my little brother subdividing the fallen logs into more manageable pieces. With every cut, the massive branch shrunk a little, becoming slightly less daunting. Except for when I dropped a log on our neighbor’s gate, knocking it off its hinges, the work went smoothly. Smoothly, that is, until the final cut of the day.

Under the big branch grew an array of tall bushes–or maybe short trees–which exerted a good deal of upwards force on it. We didn’t realize it at the time, but these bushes were an important part of what was keeping the branch held aloft.

As I pruned away smaller subbranches, I often had to finish the cut from below. Once or twice I made the mistake of trying to complete the whole cut from above, making it three-quarters of the way through before the branch would succumb to the bushes’ upwards force, clamping my chainsaw in its woody grip. When this happened, I would have to stop the saw and wiggle it free. I learned from my mistakes, however, and started checking each branch’s tension before starting a cut. High tension? Finish the cut from below. Little to no tension? Finish from above.

I eventually arrived at a branch that seemed especially taught, wedged tightly against the trunks of several of the lanky bushes. I didn’t think much of it and began my cut. All of a sudden the branch began to shear and the air was filled with a deafening crack. Before I had time to realize what was happening, the branch rushed away, and my side was hit by a massive blunt force.

My ears rang and I hung in silence. Adrenaline coursed through my veins. My hands were shaking, still holding the now-extinguished chainsaw. I wiggled the left side of my body, making sure limbs were still attached, still moving the way they were supposed to. Comforted by positive results, I did my best to relax. 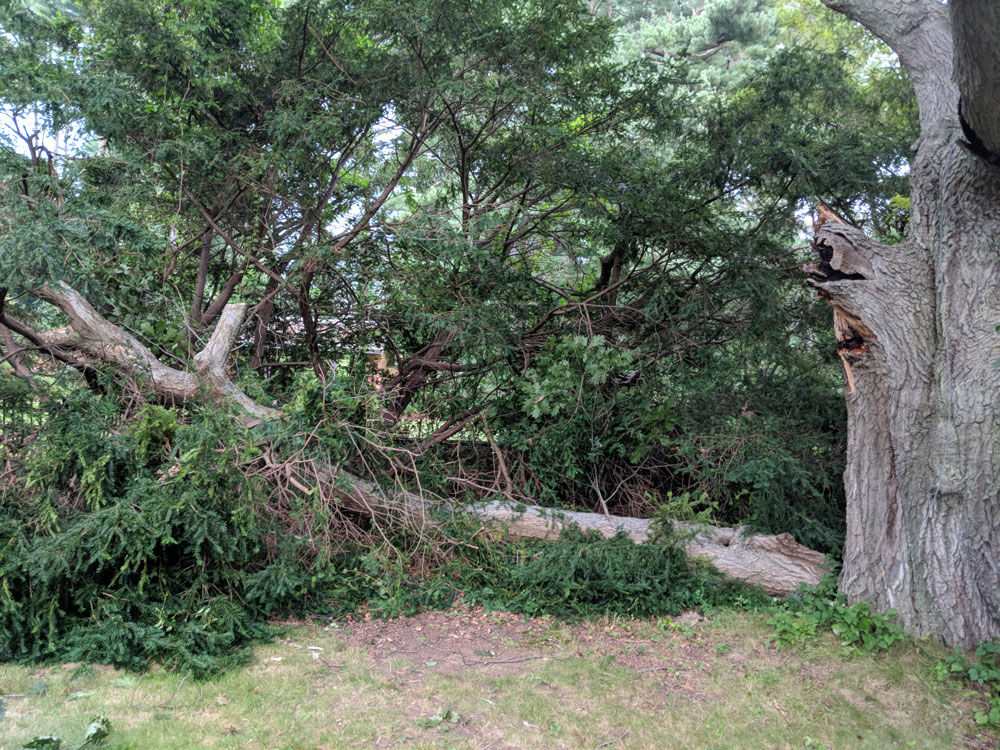 It turns out the seemingly insignificant branch was supporting a non-trivial amount of the bigger branch’s weight, and when I began to cut it, the forces acting on the branch fell out of equilibrium and it thundered down to a lower, more permanent resting place. As it did so, it twisted, hitting me with one of its remaining appendages.

Miraculously, everyone was okay. I eventually lowered out of the tree and we called it a day.