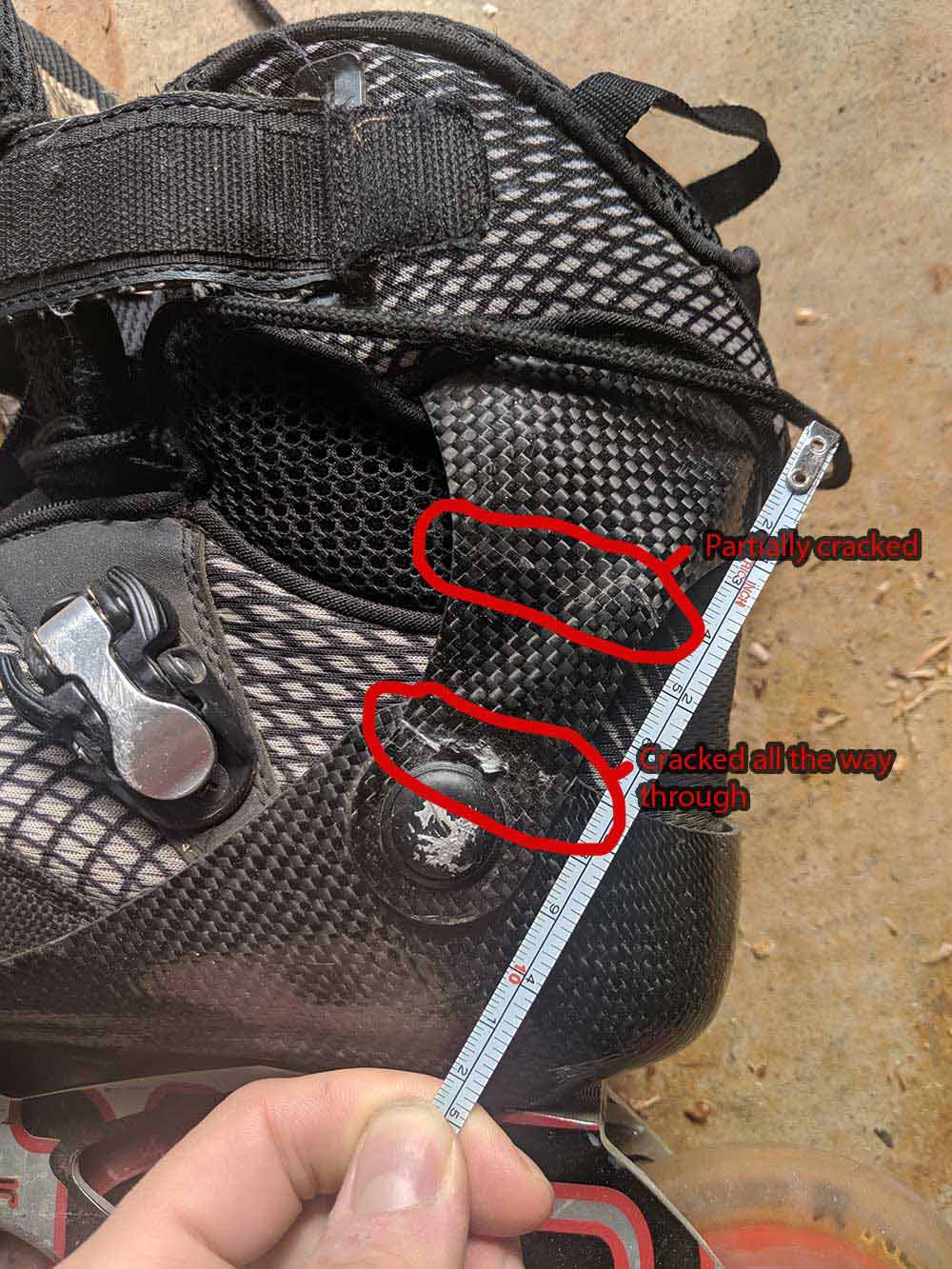 I bought a pair of used K2 Radical Pro inline skates in mid-March. They’re great: super fast, super comfy. At least, they were great until I cracked one of the carbon fiber/fiberglass composite cuffs. The part of the cuff that connects the cuff to the pivot at the ankle cracked in two places. I repaired this fairly successfully, and I’ve outlined the repair below.

The repair has required continuing touch-ups: using epoxy to re-attach separated layers and replacing the screw post with extra threadlocker after it came unscrewed while I was skating. So, the repair certainly isn’t perfect, but it’s been good enough to continue skating. 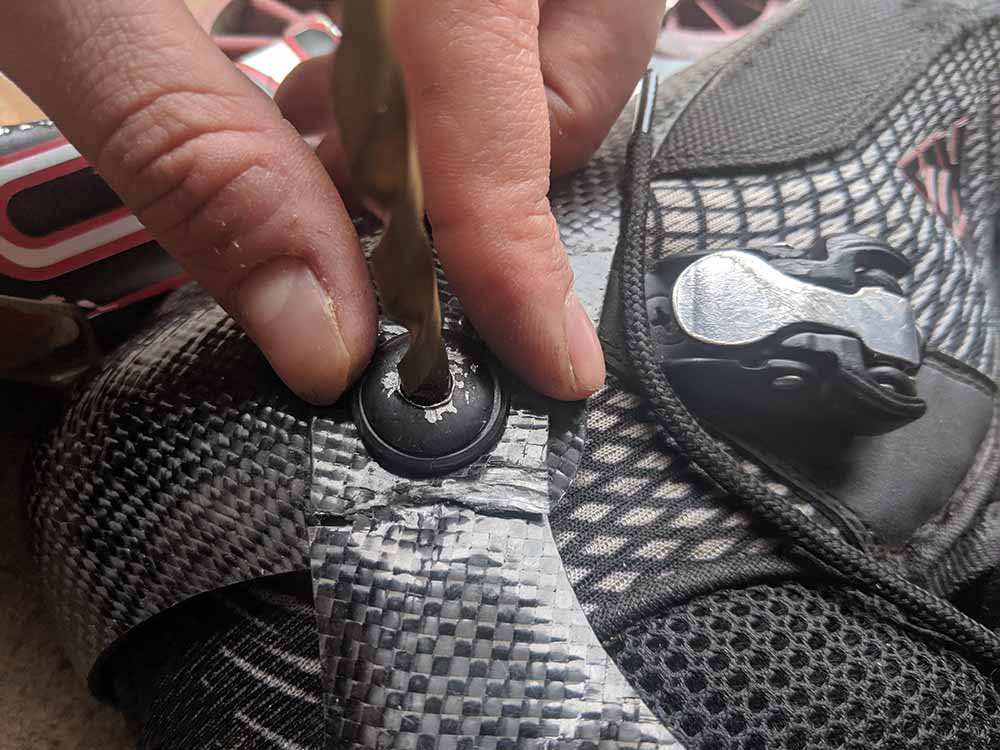 I removed the rivet (allowing the cuff to pivot around the ankle) by drilling away the center. I started by drilling with the smallest drill bit I had, then using progressively larger bits. The biggest drill bit I had was a 1/4” and it wasn’t quite big enough, so I had to wiggle it around a bit. 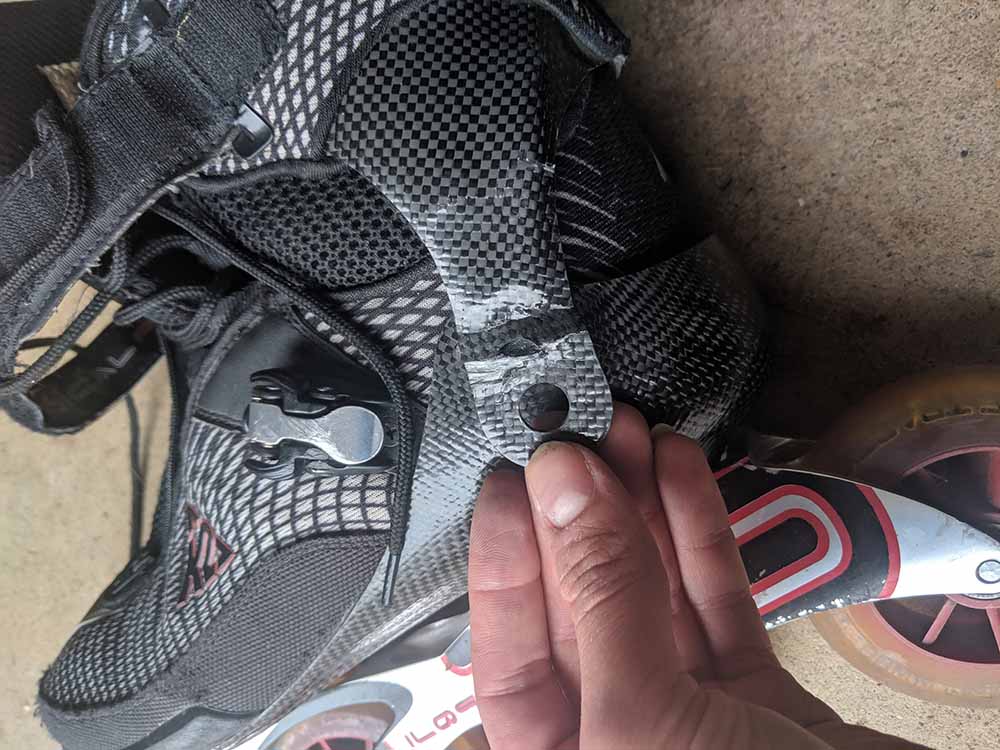 This is what things looked like once I had removed the pivot rivet. 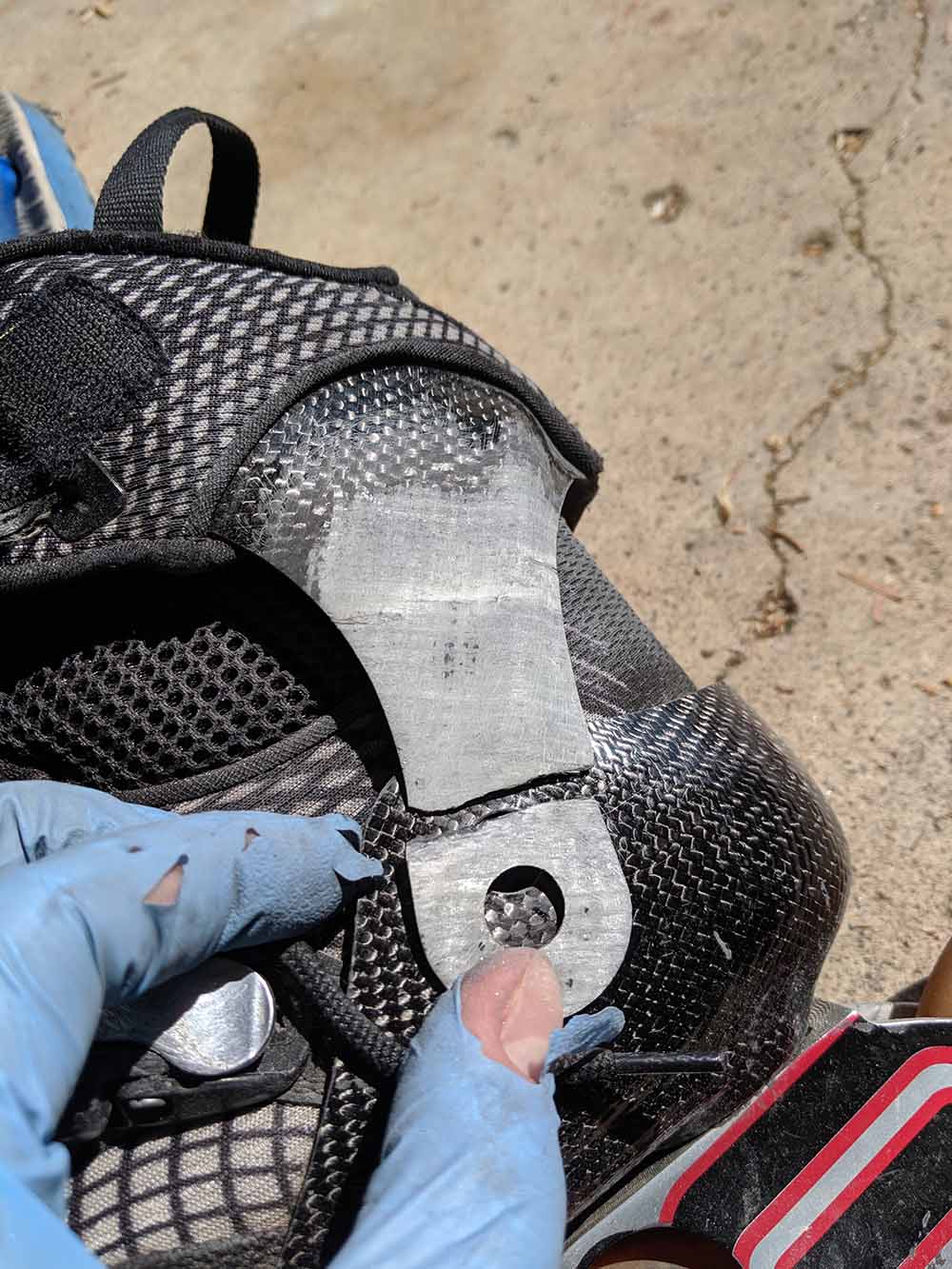 I sanded around the cracks with very rough sandpaper. 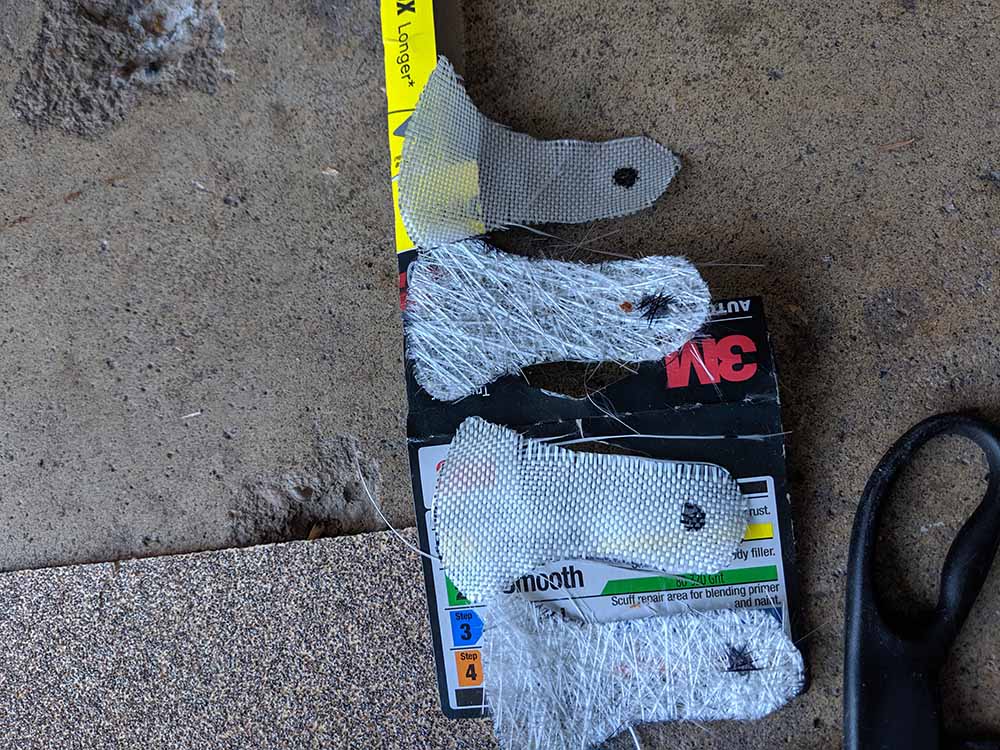 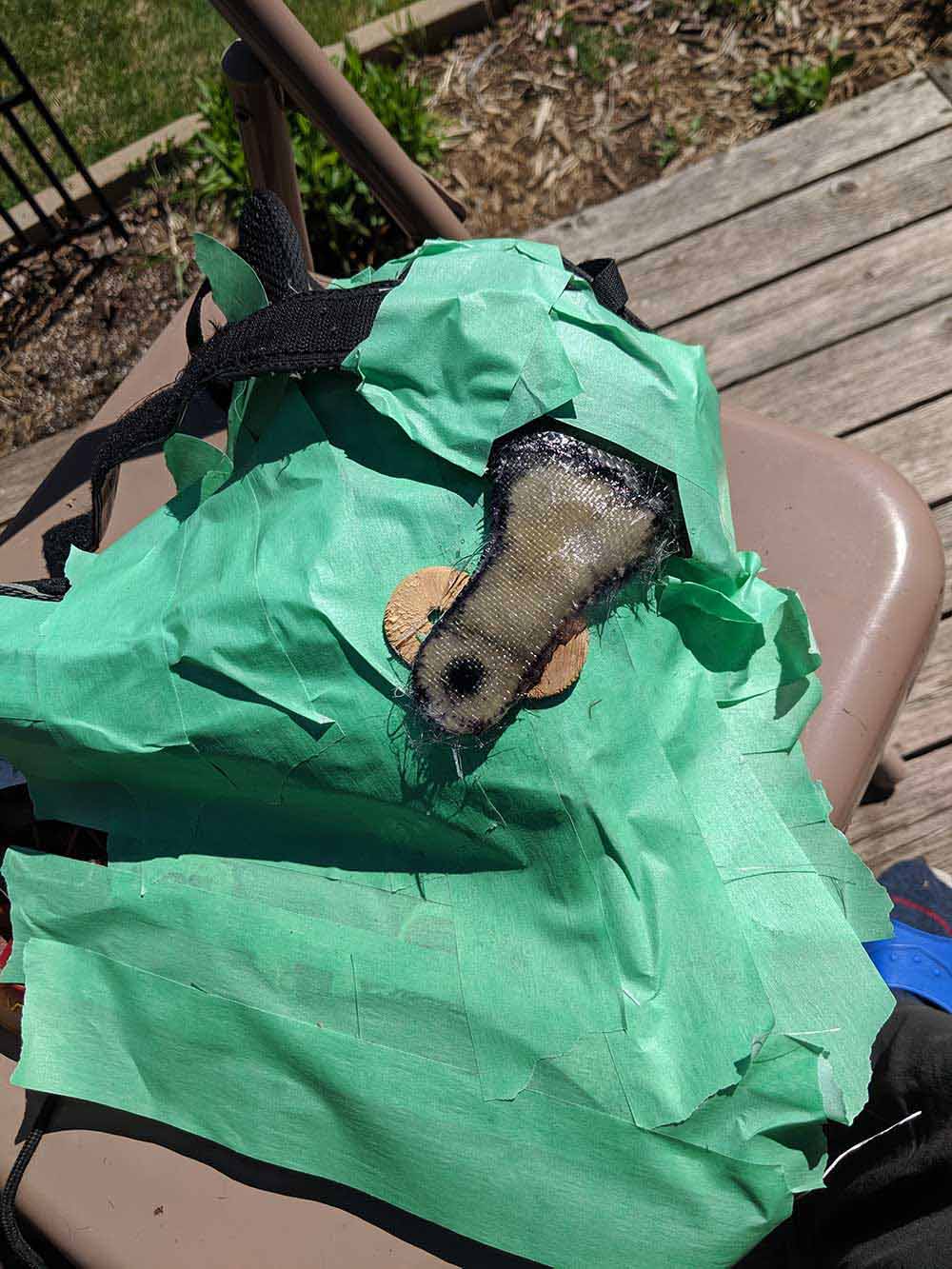 I mixed up the polyester resin which came with the fiberglass (I was using a Bondo car repair kit). I painted on a thin layer of resin, added the first layers of fiberglass, dabbed on some more resin, made sure there weren’t any air bubbles, added the second layer of fiberglass, etc.

Once the resin had dried, I sanded away the excess and re-drilled the hole for the pivot. I had been worried about what I would use as a new pivot (to replace the rivet) however I found some screw posts at Menards which I figured would do the trick. 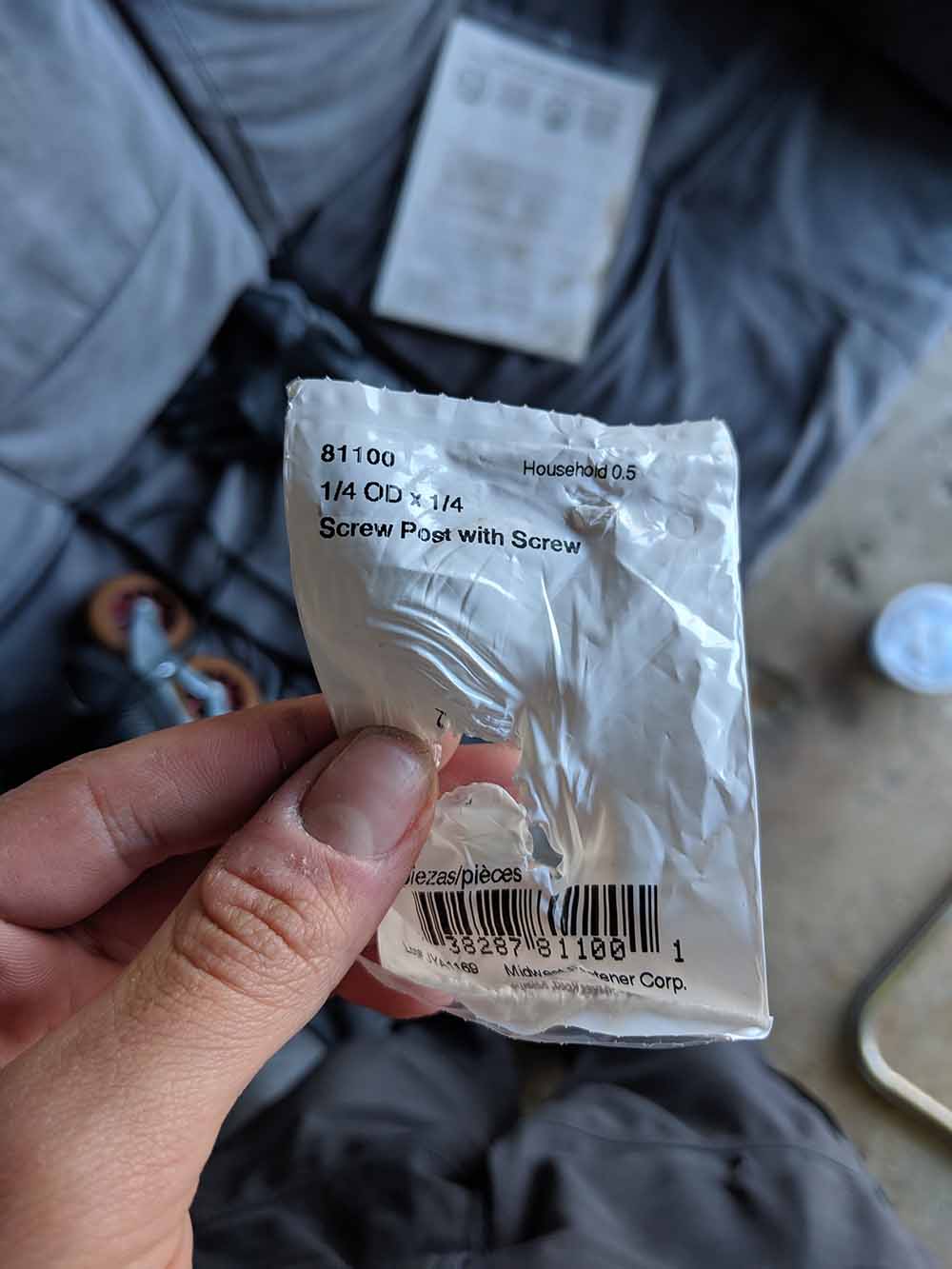 The screw post I ended up using was 1/4” outer diameter and 1/4” long. Ideally, I would have used one a little longer, but Menards was all out. I also added on a washer between the screw and the original plastic bit on the outside of the pivot. I reused the angled metal washer from the inside of the pivot. I used Loctite Threadlocker Blue to prevent the pivot from coming undone, although it has come undone once while I’ve been skating. 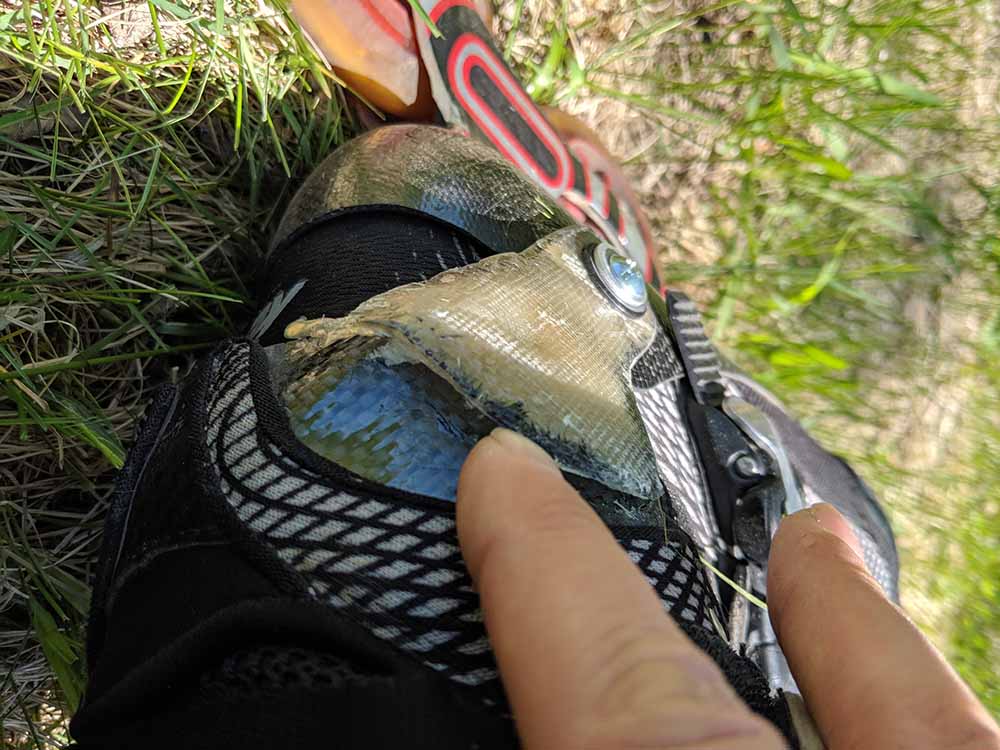 The repair failed when I had skated three miles away from my house. I ended up having to walk home barefoot! The new fiberglass layer from the repair separated from the old fiberglass of the cuff. I attribute this to the poor secondary adhesion of polyester resin. I went and bought some cheap epoxy at an auto repair shop and dabbed a thin layer in to where the layers had separated. I also separated (with a knife) the layers at the pivot as they had been starting to separate a bit on their own and epoxied them back together.

The repair was ultimately a success, although in retrospect I should have used epoxy resin from the start (although they didn’t sell any at my local Menards, I would have had to order it online). The polyester resin just didn’t adhere strongly enough to the original fiberglass/composite even though I had sanded it down. I would also use a more heavy duty threadlocker to make sure the screw post at the pivot doesn’t come undone while I’m skating.